The Itasca Project is an employer-led civic alliance that focuses on improving the quality of life and economy of the Greater Minneapolis-St. Paul region. The Itasca Project is unique in that is an entirely volunteer-run, virtual organization. It has no staff and volunteers meet only four to five times per year to discuss priorities and the progress of their task forces. 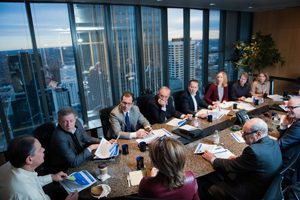 The volunteers that run the Itasca Project are industry leaders in the area, and CEOs of area companies will often volunteer to lead a task force for the project. Task forces focus on a priority that has been identified by the Itasca Project leader, and they form partnerships with other organizations to accomplish goals related to that priority.
Current priorities include career and college readiness, measuring regional progress, and closing socioeconomic employment gaps. The Itasca Project regularly releases reports about important regional issues and their chosen priorities.

The unique structure of the group and ability to attract industry leaders makes it ideal for providing independent oversight on the region’s economy. The Itasca Project encourages collaboration, provides a third party perspective on the economic progress of the region, and holds itself and key partners accountable for enacting change.

SA2020 is a nonprofit in San Antonino, Texas, whose goal is to drive progress toward a shared vision of San Antonio by reporting on community indicators, informing and activating the public, and aligning efforts toward the community’s goals.

The purpose of the nonprofit is to ask “Where do we want San Antonio to be in 2020?” and continually measure San Antonino's progress in achieving its goals via a variety of economic and social causes.

Much of SA2020’s work is data focused – they conduct research and create reports to better understand the San Antonio economy. SA2020’s research and data is available to the public in an easy-to-understand and highly visual online data dashboard. Users can select a cause like downtown development, health and fitness, arts and culture, or transportation, and view statistics about that cause. All the statistics are under the header of an aspirational statement about San Antonio like “In 2020, San Antonio residents are among the healthiest in the country” or “In 2020, San Antonio is recognized as a respectful steward of its natural resources and a model for responsible resource management.”.

Each dashboard provides several data points that indicate San Antonio’s progress in making that aspirational statement become reality, including where they are currently and where they’d like to be in 2020. For example, the Health and Fitness dashboard measures obesity rates, and shows that obesity rates need to decrease to reach their 2020 goal. Each dashboard also explains why each topic is important to San Antonio, and why improvements must be made in that area.

By pairing a community goal with measurable data, SA2020 is keeping the community accountable for striving to reach its goals, and actively measuring positive changes in the community.

The Beacon Council, Miami – One Community One Goal Branding 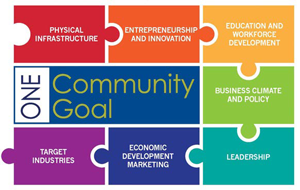 Since its creation in 2012, Miami-Dade County’s One Community One Goal (OCOG) deconomic evelopment strategy has evolved into much more than a strategy. Facilitated by the county’s economic development organization, The Beacon Council, and its consulting team, OCOG’s development involved more than 6,000 residents.

From the beginning, OCOG was branded and widely communicated as being the community’s overarching, go-to vision for all activities related to the county’s economy. Even today, OCOG is highly visible in Miami-Dade, and its initiatives include annual OCOG events and awards, OCOG breakfast series, OCOG education partnerships, an OCOG young leaders organization, and monthly OCOG updates in the Beacon Council’s newsletter.

OCOG implementation has been especially successful due to widespread community involvement in accomplishing its goals, both in terms of volunteer commitment and financial investment. Prominent community members have volunteered to serve on the One Community One Goal Leadership Team, and the heads of academic institutions from K-12 to post-secondary volunteer to serve on OCOG’s Academic Leader’s Council.

The OCOG buzz is palpable six years after the strategy’s completion. It has organically morphed over time to also include new activities that were not part of the original strategy but are highly relevant to achieving OCOG’s vision and goals. Last year, for example, more people attended the annual OCOG event than attended in the first year after its launch – a testament to the power of an inclusive initiative with strong ongoing communications and branding. 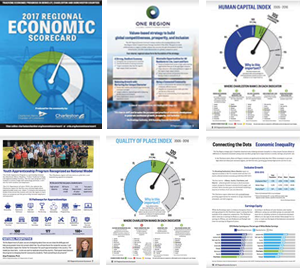 Every year, the Charleston Metro Chamber releases an Annual Economic Forecast, and has done so for over 25 years. The Economic Forecast is a combination of historical data trends coupled with qualitative analysis by the Economic Outlook Board. It provides a brief summary of economic and demographic trends from the previous year and a forecast of employment and industry trends for the upcoming year. Data is collected by the Chamber’s Center for Business Research and Charleston College’s School of Business.

The Economic Forecast has been an important tool for the Chamber because it increases transparency of the Chamber’s activities and makes information about economic progress easily available to the entire community. The Chamber is better able to understand if they’re doing worse, as well, or better than the previous year, which leads them to ask what they can do to improve. The Economic Forecast also holds them accountable for achieving economic goals. 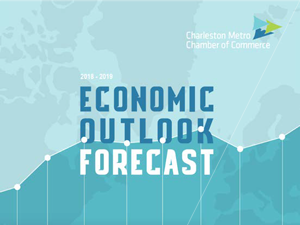 In addition to the Forecast, the Charleston Regional Development Alliance and Metro Chamber partner to produce an annual Regional Economic Scorecard. The Scorecard is based on an index of metrics associated with the region’s five-year economic development strategy and includes topics such as human capital, entrepreneurship, quality of place, and equity. The Scorecard report and corresponding event also features highlights from the year – initiatives, rankings, and news –related to the region’s strategic priorities. By benchmarking against six competitor regions, the Scorecard also puts the data into context and doesn’t shy away from showing regional weaknesses.